After my last post about my younger son barfing a friend commented that the title of her autobiography, or maybe it was her book on parenting, was going to be “And then someone barfed.” I suspect you can see where this is going. My husband started to feel unwell after dinner and went to bed early, I put the younger son to sleep and then stayed up too late watching TV with the older son. He went up to get ready for bed and I sat in the living room enjoying the sound of the rain when there was a sound of.. something else.

I had been expecting my husband to be the next one down for the count. He had even taken a bucket to have next to his side of the bed but it was my older son’s turn. I can’t remember the last time before this that someone threw up so apparently  my kids are unclear on how to do it in a way that minimizes clean up. Younger son barfed in the bathroom sink, older son all over the floor of the bathroom. So, at midnight I was washing the rug and cleaning the floor of the bathroom.

The good news is that both the older son and husband appear to be fine now. I spent a large portion of today washing the bath toys that were in the wrong place at the wrong time followed by making the soup I mentioned the other day. You guys, that soup, it took me three hours! I didn’t want to leave the seeds in (the recipe has you cooking the stringy bits and seeds in broth to impart more pumpkin flavor) so I could roast them so that too me longer than it would have otherwise but there were LOTS of steps. It smelled great when it was cooking so I have hopes that it will be delicious but it really better be!

Oh, amidst all of that I also baked a maple walnut pie which won’t win any beauty contests but will also hopefully be delicious. Fingers crossed!

We have been invited to a friend’s house for Thanksgiving this year and her tradition is to have soup with the meal. I said that I would make the soup and set out to find a sufficiently Thanksgiving-y recipe. I settled on a Martha Stewart recipe for Harvest Pumpkin Soup. I had a couple of sugar pie pumpkins on hand from my CSA but set out to look for the other vegetables needed at the farmer’s market today. I was only partially successful. 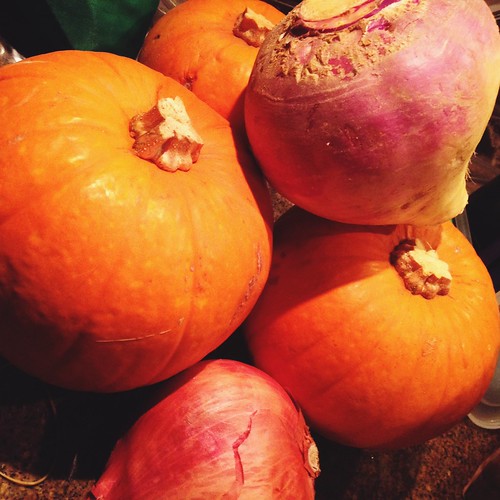 I got the turnip and shallot (pictured above) but I couldn’t find any parsnips! I asked one of the vendors and he said that their winter vegetables are just starting to come into season. I picked one up at Safeway instead. I still need to get a few things plus ingredients to make the Moosewood’s Maple Walnut Pie. It is kind of like a pecan pie without corn syrup, so it’s less sticky. I have made it before and really like it.

I am gearing up for Thanksgiving and looking forward to the rest of the meal along with the good company of my friends and family!

I missed a day! I even had something to post about yesterday besides food: embroidery. I’m not actually doing any embroidery but I’m thinking about it. Kristi gave me Embroidered Effects for my birthday and I brought it to school yesterday to help me teach the kids in the sewing class how to embroider. I am going to guess that if you look at my blog posts for the past several Novembers you will find me saying that watching the kids embroider really makes me want to. As I told them: you don’t need fancy stitches to make something nice with embroidery. I should pick a project from that book and actually make it. I usually can’t figure out exactly what I’d do with something embroidered and that stops me from making it. I had the Sublime Stitching Stitchable Stationary kit and embroidered that last year, which I really liked doing. I could do more of that too. Every year, though, I talk about it and then the only embroidery I end up doing is on felt holiday decorations.

The other craft I’ve been thinking about is paracord bracelets. I was looking at a book about them in the bead store last week and then found a tutorial on how to make them and an Etsy shop that sells the supplies. So now I have paracord and buckles and I guess I better figure out how they all go together. I was hoping to get my kids interested in working on them. I got some glow in the dark buckles but they have turned out to be enormous so I’m not sure they’ll work. I got a few smaller green ones too. If it happens, I will post pictures.

I just did something incredible: I made soup in five minutes. Those of you who know me in "real life", as they say, or just on Facebook know that I have a VitaMix blender and I have been known to blend odd mixtures, or at least things other people don't want to drink. I haven't used it in a while for some reason but I got some fresh red chard at the Farmer's Market on Sunday and I have a jar of fresh raw cashew milk so I decided that it was time for green smoothies in the morning again. This morning's creation was 1 cup raw cashew milk, 1/2 a small avocado, 1 apple, 4 strawberries, a couple handfuls of red chard leaves and a squirt of agave nectar and it was delicious and very bright green. Getting the blender out and making stock the past couple of days (vegetable one day, chicken the next) reminded me that one of the things that impressed me about the blender before I got it was that the demo guy made soup in it while I stood there so I decided to give it a try. Stefan was asking for tomato soup and the recipe book that came with the blender had a recipe for Tomato, Onion and Cheese Soup. So I made that.

It's 1 large tomato (I used 4 small ones), 1/4 cup onion, 1/4 cup cheddar cheese, 1 Tblsp tomato paste and 1 cup low sodium broth (I used homemade vegetable) in the blender on high for 5 minutes. That's it. I may have used too many tomatoes (2 probably would have been enough) and the onion was a bit too much for me but otherwise it was good. I am definitely going to try it again. I will either reduce the onion, buy sweet or red onion or take the extra few minutes to saute the onions. I might actually use chicken broth if I did it again, to add more flavor. But… how awesome is it that I can put cold ingredients in and get out steaming soup in such a short amount of time? The only downside (other than me rocking some serious onion breath right now) is that the blender sure is loud running for 5 minutes.

In NaNoSweMo news I am up to 5 inches of my sweater. This sweater has an inset front panel but I didn't see any reason not to knit the two fronts and the back in one piece so that's what I'm doing. That makes it difficult to photograph. But here goes. (Plus, you're getting iPhone photos for the next little while until I can figure out why my iPhoto hangs up when I try to export to Flickr.)

I am doing some calculations on the back to add more decreases to the waist and then I'm going to go down to the instructions for one size smaller on the back. I find that if I do that I get a better fitting sweater that doesn't bag in the back. Not bagging is good! I think it's going to work but I need to remember to pay attention to the decreases and bindoff at the shoulder so that I end up with pieces that are the same width at the shoulder. Instead of paying attention to the sleeves from the pattern at all I'm going to do a top down set-in sleeve which will make it faster (no sewing it in!) and hopefully a better fit. My last Norah Gaughan sweater had very snug sleeves. I wondered why they were so slim and then I read a note from Norah on Twitter:

Paraphrased: A slim sleeve makes for a flattering garment. But! Knitter, know thyself =)

Well, I know myself and prefer a less slim sleeve! I'm glad it's not just me though.

I have been wanting lentils recently. I blame The Good Eats lentils episode. So, tonight I made "Lentil Soup, with a Hint of Fruit" from Mollie Katzen's Vegetable Heaven.

I happened to buy lentils today with no particular plan (see above) and then I got the brilliant idea to look in this book, which has some wonderful recipes in it. I didn't have any stock defrosted so I broke my own First Rule of Soup: Never Use Water When You Could Use Stock. I think stock would add some depth to the flavor but otherwise, I think it turned out very nicely. It definitely benefited from a touch of pureeing with the stick blender to thicken it up but it was just as tasty untouched.

Now, I need to combine this with another loaf of that home baked oat bread and I'd be in heaven.