I took up rock climbing over the summer accidentally. It does seem odd that I could have slipped and fallen into rock climbing but it was really unintentional. My younger son was interested in rock climbing so I took him bouldering which we thought would be easier and less scary than top rope climbing. Well, it turns out it’s a lot harder so I took a belay class intending to just belay him. I told the instructor that when the class started, that I didn’t want to climb. He told me I needed to climb a little in the belay class so someone else would have a chance to belay. So I did, and then he kept encouraging me and I made it all the way to the top of a climb. (A very easy climb, but still a climb!)

My son and I met up with a friend and her kids at the climbing gym a few times and she and I belayed the kids and also got to climb a bit. I was enjoying it and then started climbing with a friend of mine who has been doing it longer and is much better at it than I am. She has been giving me tips and encouragement and I have impressed myself with how I have overcome feeling scared about being up high and trusting my body to be able to push me up and hold me there! There is some learning to trust the rope too. It does a lot of the “keeping me up high” work.

There are other facets of my life where I have stepped out of my comfort zone recently and one of them is marches and protests. I went to a protest tonight about politics. I am very concerned about the state of our democracy and wish that I felt like things could get better. I showed up for a rapid response protest without a sign and without much idea of what I would do there, but a wise friend told me recently, showing up is often the most important thing (in life and in protest).

I will say this: I would much rather be rock climbing.

This morning I dropped my darling 10 year old son off at school so he could head off to Science Camp without me for three whole nights! Alas. I spent some time drinking coffee and discussing charter schools with some friends over coffee and then… 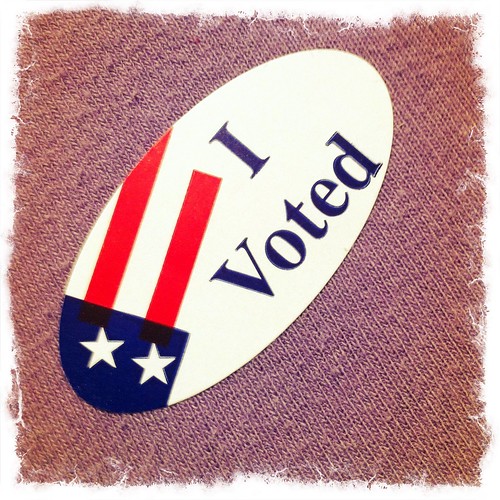 I live in a pretty blue state. A state so blue that as soon as the polls closed NPR called us for Obama. We also have the most electoral votes. I found that somewhat comforting while watching the results slightly obsessively on NPR’s big board of numbers. I am relieved that election night is (mostly) over. The 2000 election has scarred me and without a sizable lead I kept thinking that they could turn any one of those states back to undecided or, worse, red. But it looks like it’s in the bag so I can have a celebratory beverage and sit on my couch and knit.

Actually, I think some of the blame lies with YouTube videos of various Occupy protests. I keep watching videos of college students being beaten with police batons or pepper sprayed as they sit quietly on the ground and it just makes me want to throw up or go to sleep so I do the latter. Couple that with the Penn State/Joe Paterno stuff and I really want to hide from the rest of humanity.