I am a sneeze away from being done with my Organic Chocolate Tomato tee. I've been quietly knitting away on it. It's hard for me to tell if it's going well, since it will shrink 10% when I wash and dry it the first time. It doesn't look great now, but hopefully that will change. I also have mixed feelings about the colorwork, but I think I will like that much better after washing as well. Washing fixes everything!

The thing washing won't fix is that the ribbing on the one sleeve I finished is too loose. I'm going to reknit it with smaller needles. Cookie helpfully pointed that out to me, but was kind enough to also warn me not to show her my sweaters, because she'll always find something wrong. Duly noted, Cookie!

I have also pulled my Lotus Blossom Tank out of hibernation. It was actually pretty much finished. I had sewn the shoulder seams and just had to finish around the edges and it was done. But, it wasn't right. I did two sets of short rows for the bust and that was too much. In addition, I hadn't knit far enough on the sides so it did some ugly angling things. I ripped back to right before I started the second set of short rows and I'm moving forward. It might even be done in the right season!

I am still working on the Starghan, but I am also knitting again. 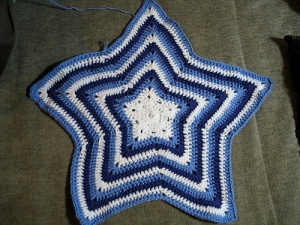 I've actually made quite a bit of headway on my Lotus Blossom tank. I have finished the front and am working my way up the back. I think it looks pretty good so far. I have high hopes for it. I might try to add some short sleeves, if I have enough yarn. I doubt that I will, though. 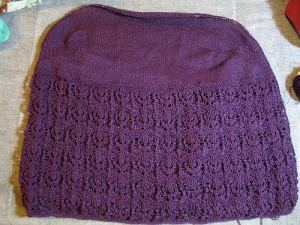 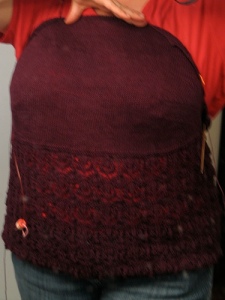 The Husband Hybrid is also growing. Both sleeves are done and I'm about 4 inches into the body. I need to knit 18 inches of body before I can connect it all. That's going to take some perserverence! Wish me luck.

I have completed the lace part of my lotus blossom. I was going to say that I feel like I'm in the home stretch but those long boring rounds of stockinette are a snooze-fest. I'm determined to finish this top with enough time to wear it before it gets cold. I think I have at least six weeks, though. It shouldn't take me that long. (I hope this isn't famous last words.)

lotus short rows
I am also making great progress on the first sleeve of the Husband Hybrid sweater. I am knitting the sleeves first so that after I slog through the body I get to join the sleeves and start the exciting decreases rather than having to mini-slog through the sleeves at that point. It worked for Rogue, I'm hoping it works here too. I'm actually thinking of making myself one of these in one of my other colors of All Seasons Cotton. I'd want to make a V- or U-neck, though. I'll have to see how I feel about that idea after actually completing the yoke of this one.