I didn’t really “win” NaBloPoMo this year. I missed many days and didn’t even apologize for it. Sheesh, how rude. However, I enjoyed blogging again even if this year didn’t result in any long introspective posts or posts about dryer lint. I am going to try to keep up a habit of posting at least a couple of times a week, as usual, I make no promises. 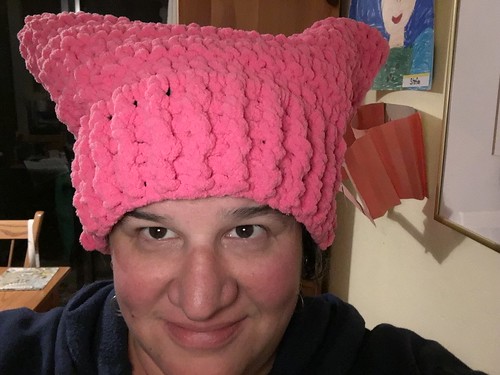 I crocheted this one out of that same super bulky yarn, thinking crochet would go faster. It didn’t. I think that is true in part because I was trying a new stitch (the crochet ribbing on the edge, it is front post dc alternated with back post dc, both new to me) in a fuzzy yarn. Also, bulky yarn can be cumbersome to work with, I think.

The funny thing about that hat is when I put it on to take the picture, Docker growled at me. I took it off and showed it to him and he jumped back like it scared him. Maybe he thought it was a big fuzzy pink monster trying to eat my head. In any case, he didn’t like it.

I have started another in a thinner yarn. 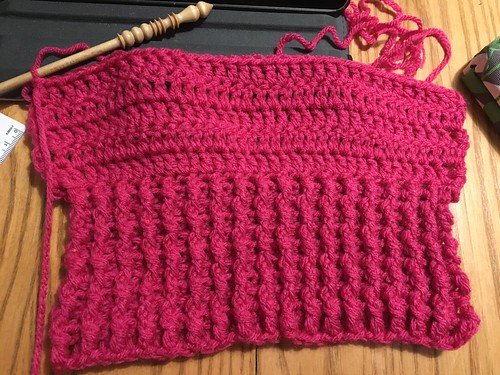 It is still not going super fast. Sewing up the sides is also a slow process for me. Maybe the next one will be the crochet pattern in the round, or maybe I will knit another. The super bulky yarn is gone but I have a large ball of this hot pink to get through.