I have been making to do lists recently. One reason I like to make lists is purely for the satisfaction of checking things off. I notice, however, that some tasks just get moved from one to do list to the other over and over and then I just feel guilty about them. Somehow that guilt never translates into actually getting the item done. This all feels counter productive. I am searching for a way to break this bad habit.

A few years ago, I did the Motivated Moms chore list. I am thinking that it might be time to try it again in 2016. I looked back at the mostly ignored decluttering blog that I share with my friend Juls and realize now that it must have been 2011 when I started doing that! That is a significant number of years ago! I also noticed that I went through a decluttering spree in the beginning of 2013 and 2014 but not 2015. I can feel another spree coming on for 2016, so I might start posting over there again in January.

Anyway, my point today was that I have made lists (and legitimately checked a few things off) but I have not made any crafts. I got excited about the idea of book making and ordered a few supplies so I hopefully will have some time tomorrow to try my hand at making a simple sewn binding book so that I have an actual craft to post on my knitting blog. I would post my knitting but it looks remarkably similar to the last time I posted it, since it’s a fairly simple cowl. Around and around I go.

Instead, here is a picture of the green things growing by the side of the trail on my walk today. They’ve made progress in the past few days! 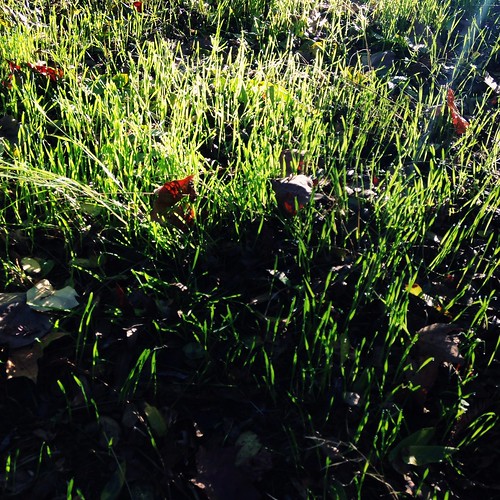