It rained this morning! That is an exciting occurrence generally but it was also a fairly impressive rainfall. I didn’t check how many inches (or fractions thereof) we actually got. My husband usually checks and tells me and it is always way less than I would like so I am going to live in blissful ignorance.

This evening the kids and I got to go to a friends and family showing of The Good Dinosaur at Pixar. My cousin works there and has gotten us in to see the past two Pixar movies at these previews. It’s very nice, they have a theater in the main building with comfortable seats and there are no previews or ads, just the short and the movie. Both were quite good, as usual! I didn’t bring tissues but I really should have. Pixar tugs at the old heartstrings. I think this movie really spoke to my younger son’s dinosaur-loving heart. He was rapt for pretty much all of it and he gets wiggly in movies, even kids’ movies. He hasn’t talked that much about dinosaurs recently but they used to feature in a lot of our conversations and most of his play. We didn’t arrive early enough to get an Arlo plush but I suspect that will be remedied ASAP.

I tried to get a picture of one of The Good Dinosaur banners but it was too dark but since it was completely dark when we came out, Luxo was lit up! 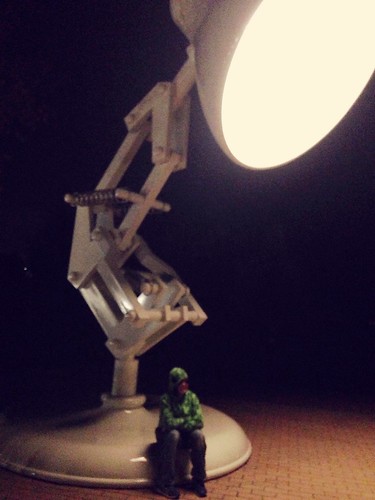 We hadn’t seen that before. I still think Luxo is adorable.

2 thoughts on “a visit to Pixar”