I found the picture of the crocheted scarf! 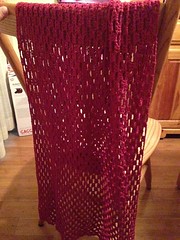 And here’s an action shot of it being worn by my friend when we went to see W. Kamau Bell perform. 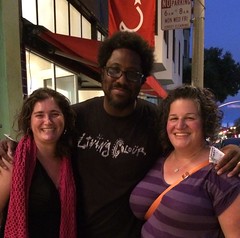 (For those of you keeping track, I posted about having known him in college last November.)

It occurred to me today that it was November. I know that sounds ridiculous but those who have followed me for a while know that since 2009, I have participated in NaBloPoMo: National Blog Posting Month. It’s a spin off of NaNoWriMo: National Novel Writing Month. One year I even tried to do the National Sweater Knitting Month thing too, but that is crazy. (Probably not crazier than writing a whole novel but I have never tried to do that, nor do I have an inclination to do that.)

I thought about NaBloPoMo a few days ago and wondered if I was going to do it. I hadn’t really decided but then I forgot to start. But here I am, starting.

As usual, my NaBloPoMo starts with a round up of all of the crafting that hasn’t been posted here. My last post was February (ack!) so let’s look back…

There was a scarf for my younger son’s school silent auction. 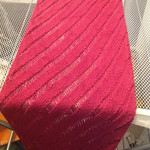 Another cowl for my older son’s school silent auction and a teacher gift that didn’t make it into photos.

A birthday jar for my cousin, Kristan. 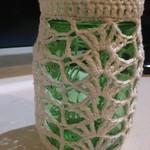 A bunny for a pregnant friend’s imminent new arrival. 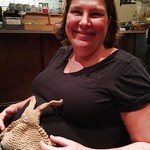 And a silk cowl for a friend undergoing cancer treatment. 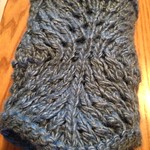 This cowl was designed by my friend, Pam. (See it on Ravelry!) Pam is the person I credit with starting me off on my knitting career. She was a WAHM at the time who sold soakers and knitting patterns and was one of the women I met online in my early parenting career who had me thinking that knitting my own wool soakers for my cloth diapered baby would be cheaper than buying them. That may have been right in some ways but I am sure I have spent more on yarn since then. Still, I love Pam and appreciate her having encouraged me on my knitting path. You should buy her pattern.

I’m realizing there is a missing item from my photos above. It is a scarf I crocheted for a friend who helped me a lot during the incredibly stressful months that my husband was out of work. I thought I had a picture of it somewhere, so I will have to dig that up.

One reason I wasn’t knitting is that I was making Zentangles. Like so. 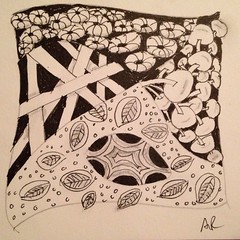 There are a bunch more on that album in Flickr if you want to go look. I haven’t done any of those since August, though, so I can’t really explain my lack of craftiness.

So there we are, that is my first post of this month. I clearly will not succeed in posting every day, since I’ve missed the first two, but I will do my best. Isn’t that all we can hope for?