For some reason I don't want to work on big projects. I go through this at times. I usually end up knitting dish cloths but this time it's amigurumi that have caught my attention. I was going to make another snowman but instead I decided to make a snail in a pear from a pattern called Little Toys and Their Homes. Niels had asked for it and I started and gave up on a seahorse and robot (the yarn wasn't right in both cases) for him after make a turtle and a seahorse for Stefan. So, here's the snail in his home, the S.S. Leaf (according to Niels).

peek-a-boo!
Isn't he too stinking cute for words? 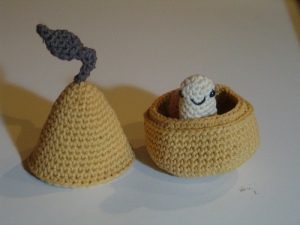 I just realized that I need a picture of the snail out of the pear. I'll get that tomorrow as Niels is currently sleeping with the snail.

I've also been thinking a lot about my living room. (I know, exciting!) We had a Hannukah party this weekend and it got me moving to get the living room, dining room and kitchen into much better shape. Big parties will do that. I'm still not entirely satisified with the state of the living room, though. I would like to replace the giant white Ikea monstrosity that surrounds our TV.

You can only see part of it here. There is another of the four-cube pieces to the right of the TV as well. It is useful in that it has a lot of drawers and closets, however as you can see from the state of the pieces on the far left, the drawers and doors have broken off a few of them. I wanted to get the TV stand that goes with our new bookcase in the corner but I don't think it is big enough for the size TV we want to get. Our couch is a fair distance from the TV and the flat TVs are wider so we'd need something bigger. Erik and I are still discussing. Anyway, here's a couple more photos. 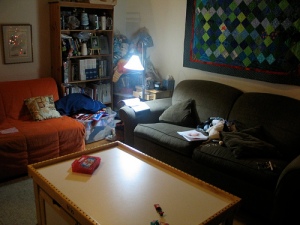 I occasionally consider putting the kid's play/train table in their room but I think it would take up too much of the room, so I'm not sure what to do. I have to say this: the room is much nicer when everything is put away. The new bookcase really helps with that.