A friend of mine is having twins soon and I attended a baby shower for her last weekend. What did I knit? Bunnies of course.

I also gave her Stefan's pair of Blu knitted jeans and I am working on a second pair so she has one for each twin. Here's a picture of Stefan wearing his pair one of the few times he had disposible diapers on so they fit.

(I can hardly believe he was every so tiny. Eep.)

Anabel posted on the BobaKnit list that we have more requests for boobs than we have boobs knit so I knit one up superfast at Boba today. I arrived at about 2:40 and handed it to Anabel at around 5:40. Speed boob!

Since Anabel had finished up two while we were there, I took a group shot too. 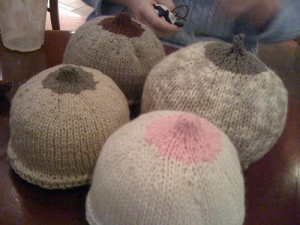 knitted boobs for breastfeding instruction
I'm not sure if there are words that can follow up that photo, so I'll leave you with that.