Purlescence had a yarn swap today and I made out like a bandit. 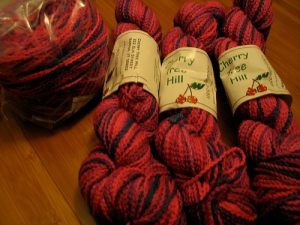 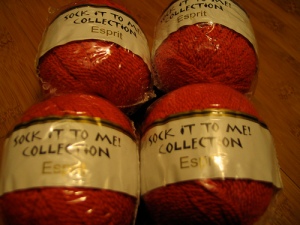 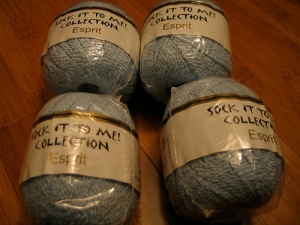 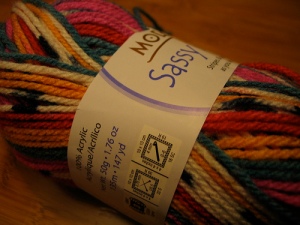 I also brought home one skein of yarn that I had to pay for: Blue Moon Fiber Arts Luscious silk in the sapphire colorway. I've been lusting after this yarn for a while and I have plan for it, so home it came. This photo doesn't do it justice, believe me.

I had all the yarn out on the floor in the office (an advantage of cleaning up the office is that I can use the floor, even if it's just for poorly lit photo shoots). Stefan decided that all the yarn spread out looked like a garden and started arranging it and stuffing some of the balls into shoes. The ones he was stuffing into shoes are actually sock yarn. Smart kid, eh?

stefan arranged a garden of yarn, in his words
The last thing I brought home was two grocery bags full of sparkly, fluffy, shiny yarns for the kids in the Textiles class to use for weaving. Kids love sparkly, fluffy, shiny yarn for weaving. We found last time that the ribbon yarn works particularly well because it lays flat and makes the project faster and the stuff we had was variegated which gives the piece more interest for the kids. I think they'll love the stuff I got.

While I was waiting for the end of the swap (to collect the stuff for school) I finished sewing the hem of Niels' sweater. It's all finished except for the i-cord tie. I am not going to make the i-cord tie, though. I am going to go to JoAnn and buy some sort of cord for the tie. I don't see a point in knitting four feet of i-cord so that one foot of it shows. Also, it seems likely, as Anabel pointed out, that Niels will decide he needs a rope for something and pull it out. At least if I have store bought cord, I can go buy another. PIctures of the sweater will come later, after it has blocked and the recipient has recovered from his current flu-y illness and is in a sweater modelling mood.

I don't know how many yards of yarn I took over because some of it was old yarn from my grandmother and I didn't know how many yards it was. Not counting that yarn, and including a fluffy yarn I'm donating to the weaving projects, 2274 yards of yarn left my house today. Unfortunately, 3417 yards came in. That's a net gain of 1147 yards. I did put a few more balls of yarn into Niels' sweater but I thought my stash total would go up. I figured out why it dropped so much between my last two calculations: Ravelry changed the way they count your yarn so that if you put something in a project it subtracts it from the total in your stash. Even so, my total has dropped again and I'm not sure how. I now have 43867.3 yards or 24.93 of yarn that's down another 6 miles and over my goal for the year. That seems wrong somehow. I must be missing something. I'll figure it out eventually, I suppose. I'm still going to aim for using up 5 more miles of yarn this year, because I think I can! I already used up almost a mile in Niels' sweater.