I need to set one day as my blog posting day and just talk about whatever it is I'm doing, otherwise I think I just posted and then it's been more than two weeks since my last real post! Oops.

Anyway, after my last post I knit one more Oh, Honey hat (Ravelry details), this time out of Calmer. I got some Rowan Cashcotton to make one for Christy by request, and then I appear to be done with the hats. I seem to get addicted to patterns and just have to knit them a certain number of times to get them out of my system, more on that later. 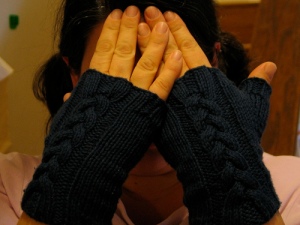 I'm modelling Cookie's pair in the first picture of the gauntlets there, I only knit myself one pair. I find it baffling though, I tend to fall for these patterns. Granted, usually it's small, instant gratification patterns like, oh, say, bunnies, or dish cloths, hats or gauntlets. I just knit and knit and knit until I feel done. I wonder what that says about me, and if it's something good or that I'm a crazy person. I think I don't want to know.

In WIP news, I'm still working on Niels striped cabled sweater. I'm on the second sleeve, so I have to knit that, the hood and then the sewing up begins. Oh, and the ends. I'm not sure it will be done by Christmas. I'm fairly sure it will not, which is probably for the best because then I'd feel bad that I didn't make something for Stefan.

I started Rogue for my mom. It was secret there for a little while, but then I had her try it on, which was good! It was too small. Darnit. I had measured her and decided on a size but then talked myself into knitting one size down. I think I wanted to get it done faster. Ah well. I ripped it out last Thursday and cast on again. I haven't gotten very far. I have until the end of January if I want to have it done for her birthday.

Before that, I have a baby shower to attend and I want to knit an Avery sweater. Two actually, because she's having twins. Maybe I should stick with the bunnies and give her the sweaters after the babies are born since I plan to make them the right size for the fall or so, and these two are due in March. We'll see.

I have a lot on my plate! Wish me luck!