I went to the Purlescence sale yesterday. I was trying to stay away, but I was holding out hope that All Seasons Cotton would be on sale, so I could get some to make Manon. It wasn't, but I found some Maizy  and Puffin that I liked, for socks and a baby blanket, respectively. Then I broke down and go the All Seasons Cotton too. I am accumulating sweater quantities of yarn. I need to get on the ball and start knitting sweaters faster. 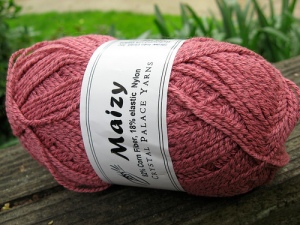 I am not sure who will get the Puffin blanket. My friend who is currently pregnant is more of a natural fibers person. I might make her a Moderne Log Cabin blanket, like the one I made for Stefan, from Pakucho. Someone else will get pregnant for me to make them a blanket, I'm sure.

I also wore my Tomato yesterday. I was going to wear it on Friday for HK, but Friday is preschool day with Stefan and I didn't really want paint and/or play dough or any of the other things the preschoolers were like to smear on it.


So while I was at Purlescecne, I picked Sandi and Nathania's brains about fit adjustments. Sandi measured my shoulders and helped me measure bust in the front versus the back, so I know how much more fabric I need. I noticed in wearing the Tomato that the shoulders are slightly too big and that the side "seam" where the shaping is gets pulled forwards and the sweater bags slightly in the back. I have a lot of adjusting to do! I think that Cookie was right recently when she pointed out that since I change patterns so much, maybe I should just start from scratch. I am going to get some knitwear design books out of the library and do that sometime soon, I think. I hope. You know, in my copious free time!

I seem to have a touch of startitis, so here's a shot of the Montego Bay Scarf that I started in BMFA Bambu. It's soft and lovely and I have no idea what I'm going to do with it. 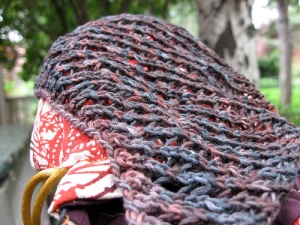 Tagged by AnnieB. I know I've done this before but I figured I'd update it.

I have been wanting to teach Niels' class to finger knit and it seems like now is finally the time. One of the other class moms is a knitter too and offered to help me teach them. We're using the instructions from Knitty as a starting point. I decided to practice today and see how it turned out. I got this.

I used two strands of Red Heart Super Saver acrylic that I got from my grandmother. I need to wind up a bunch of half ounce balls for the kids.

Oh, I gave the above, uh, piece to Niels as a scarf for his dragon. 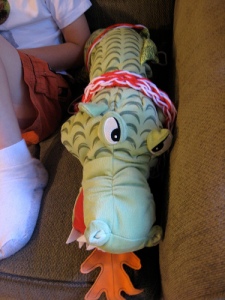 I finished my Tomato tee today! (Ravelry project details.) I'm very pleased with it. I have to say that I was a bit anxious how it would turn out when I tried it on before washing it. It just looked droopy and not very flattering.

But, Pakucho is magic in the washing machine. All the knitting evens out and it shrinks about 10% into a wearable garment!

tomato, postwashing
I am quite pleased with it. Someday, I think I want to use this yarn to make a long sleeved cardigan. I was going to say cabled, but I already have one of those, so, I'll just have to keep thinking.

I am a sneeze away from being done with my Organic Chocolate Tomato tee. I've been quietly knitting away on it. It's hard for me to tell if it's going well, since it will shrink 10% when I wash and dry it the first time. It doesn't look great now, but hopefully that will change. I also have mixed feelings about the colorwork, but I think I will like that much better after washing as well. Washing fixes everything! 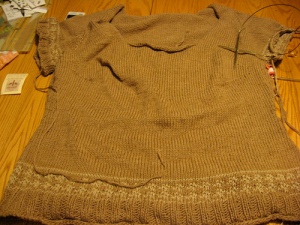 The thing washing won't fix is that the ribbing on the one sleeve I finished is too loose. I'm going to reknit it with smaller needles. Cookie helpfully pointed that out to me, but was kind enough to also warn me not to show her my sweaters, because she'll always find something wrong. Duly noted, Cookie!

I have also pulled my Lotus Blossom Tank out of hibernation. It was actually pretty much finished. I had sewn the shoulder seams and just had to finish around the edges and it was done. But, it wasn't right. I did two sets of short rows for the bust and that was too much. In addition, I hadn't knit far enough on the sides so it did some ugly angling things. I ripped back to right before I started the second set of short rows and I'm moving forward. It might even be done in the right season!

I knit another one of those adorable bunnies. This one is going off to my cousin's wife (along with the gift I knit for their baby that I have been meaning to send for months! shame on me) for her niece who was in an accident. I wanted to knit her something soft and cuddly for her recuperation. I read on my cousin's wife blog today, though, that she's diving off the couch to scare her parents already, so maybe she's done needing cuddly things. Hopefully she'll enjoy it anyway. The yarn I made it out of is Puffin by Crystal Palace which is like strips of microfleece. It's very soft. (Ravelry project details)

I've also been working on my Tomato again. I don't have another picture because it is not that attractive on at the moment. Since I'm knitting it out of Pakucho I have to account for a 10% shrinkage in length the first time I wash it. So for now the sweater is very droopy on me. I have faith that eventually it will look good.

The only other thing I've been doing is planning for future projects. I slipped at Purlescence today and bought 13 more balls of Rowan Purelife to make the No Gap Wrap sweater form More Big GIrl Knits. That wasn't why I went there. Darn those yarn fumes.

I also picked up some Rowan Damask to use as the accent yarn in the Slipstream Pullover, also from More Big Girl Knits. I knit it up in the garter stitch slip pattern with the hempathy I had to see how it looks. I like it. I just need to knit another swatch of the Damask to wash a few times to see how it holds up. The yarn label says it's very delicate, but I want to see what it really can stand. 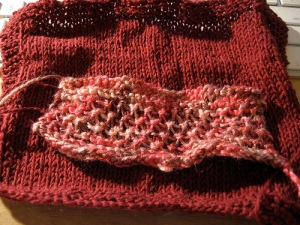 If I've learned anything from listening to Stash and Burn it's that sometimes fantasizing about knitting is as much fun as actually doing it.

I finished my Shedir a couple of days ago. I really liked this pattern and this yarn (Calmer). Niels and Stefan wanted to model it too.

I started another chemo cap but I'm not crazy about how it's going. I think I might change it.